As you sup on your beverage of choice this Christmas, be aware that there is ongoing earnest scientific research into getting those bubbles just right, whether it’s the maintenance of fizz (“fizzics”) or the perfect explosive uncorking. Not only are the scientists striving for the perfect drink, there is also relevance for volcanic eruptions and dangerous CO­2 saturation of water bodies such as Lake Nyos in Cameroon. Understasnding bubbles involves a mix of disciplines including fluid dynamics, diffusion kinetics and careful observation. The science of alcoholic beverages is properly known as stociology after the word stocious (or stotious), which, from Scottish and Irish dialect, is an adjective meaning drunk. The etymology is uncertain but might be from the word stot which means a stupid and clumsy person.

Most fizzy drinks are carbonated: the bubbles are pockets of CO2 (carbon dioxide) gas. The fizziness relies on a reservoir of CO2 in the liquid. This is often referred to as dissolution of CO2, but more correctly is a reversible chemical reaction. CO2 reacts with water to form carbonic acid, H2CO3, which dissociates, releasing acidic protons into solution and providing the tingle on the tongue that is characteristic of carbonated drinks. The pressurized headspace above the drink in its sealed container, typically a few bars for bottled beer, drives the equilibrium towards carbonic acid in the liquid phase. When the bottle is opened, the pressure is released and the equilibrium lurches back towards the gas phase: bubbles of gas erupt from the liquid. 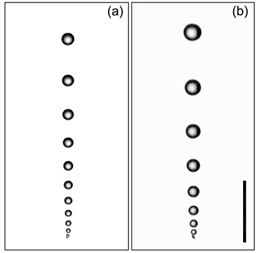 (from Liger-Belair) Bubbles imaged rising in (a) beer and (b) champagne. Scale bar is 1 mm.

The reservoir of CO2 provided by the carbonic acid allows prolonged bubble release after opening and pouring of the drink. A glass of champagne in a flute would typically release over a million bubbles if left undisturbed in the glass (though why would you?). Once formed, the diameter of a bubble grows at a constant rate. Larger bubbles rise faster, so the speed of a growing bubble increases. A 1 mm diameter bubble rises at 90 mm per second, while a 0.06 mm bubble rises at just 1 mm per second. Bubble growth is driven by diffusion of CO2 from the reservoir, but also by convection processes caused by the rising bubble. Diffusion is controlled by viscosity (according to none other than Albert Einstein). Who would have thought that Guinness is less viscous than both Budweiser lager and Moët champagne? Champagne has a larger CO2 reservoir than beer because of the higher level of CO2 from fermentation by yeast. Factor in the larger size of a typical champagne bottle and the potential volumetric rate of gas release can be 100x that of beer. This is why uncorking of champagne can be so explosive.

(from Zhang) A 230 mm tall glass of beer. A train of bubbles enlarged by 2.4x is shown on the right.

Guinness is different. Most of the fizz in Guinness is bubbles of N2 (nitrogen). N2 dissolves passively in water and so lacks the reservoir in the liquid phase that is provided in carbonated drinks by the CO2 equilibrium. With less stored gas, bubbles in Guinness grow around 50x slower than in beer; that is, they grow hardly at all. Guinness bubbles, being smaller, rise more slowly. If a local convection current has a downward velocity greater than the rise rate of the bubbles, the bubbles are pulled downward. This explains why bubbles in Guinness can often be seen heading for the bottom of the glass.

To grow, a bubble must first nucleate. A pre-existing pocket of gas is required with a minimum critical radius that depends on temperature. These gas pockets are found in microcavities in the wall of the glass and in stray cellulose fibres. In lager the critical radius is typically around 0.7 µm, in champagne it can be around 0.3 µm. As your drink gets warmer and the reservoir of gas dwindles, the size of this critical radius increases until the driving force of stored gas is no longer enough to nucleate bubbles. Game over: your drink has gone flat.

This scenario provides good motivation to get the drink down your neck rather than stagnating on the bar. Many people are familiar with the five basic taste sensations: bitter, sweet, salty, sour and umami. Once supped, the CO2 is sensed by the sour receptors in your mouth, but there is also the tingle from the carbonic acid. The minimum CO2 level to give the carbonation kick is around 1.2 g per litre (typical champagne might have 12 g per litre). It has been suggested that we evolved the ability to perceive CO2 so that we can avoid eating food that has started to ferment. N2 bubbles do not elicit the same gustatory (taste) and trigeminal (neural) responses. Guinness therefore seems smooth and lacking the sharp bite of carbonated drinks. Some of the large cola producers have experimented with N2­-based versions of their products for a smoother drink experience but bringing these to market would require an infrastructure shift away from the bottled CO2 that is currently so ubiquitous.

You don’t need to understand the science to enjoy your sauce this Christmas. Maybe you are already a few drinks to the good so that your brain is a little too addled to be thinking about equilibria and driving forces. Even so, you might like to take a moment and raise your foaming glass to the stociologists who do such fine work on our behalf. Have a great Christmas break,and stay safe.Sources:
https://doi.org/10.1021/acsomega.1c00256
https://doi.org/10.2113/GSELEMENTS.4.1.47
10.1126/science.1174601