Diamond has been known through the ages as a naturally occurring gemstone, renowned for its beauty, chemical inertness and unrivalled hardness. By the end of the 17th century there was fierce competition to demonstrate that diamond would either burn or volatilize. This was most famously achieved by Antoine Lavoisier around 1770 using two giant lenses to focus the rays of the sun onto diamonds in air. Analysis of the gas evolved led Lavoisier to conclude, correctly, that diamonds consisted entirely of carbon. The scientific perspicacity of this was apparently lost on the leaders of the French Revolution, who saw the experiments as shockingly wasteful, an opinion that may well have influenced their decision to send him to the guillotine.

Despite its ruggedness and chemical stability, diamond is not the stable form of carbon in standard conditions. The stable form is actually graphite, but an energy barrier prevents spontaneous transformation from diamond to the less glamorous allotrope. The manufacture of synthetic diamonds involves creating conditions where diamond is the stable allotrope, allowing formation of diamond from carbon-containing precursors.

Early synthetic diamonds were created by squeezing graphite, together with a catalyst, to several thousand times atmospheric pressure. Diamond has also been created from aqueous solution, the type of process that some believe is similar to how diamonds form in Earth’s crust. Another technique that is now well established is to grow diamond from carbonaceous gas such as methane, a process called chemical vapour deposition (CVD). Methane with an excess of hydrogen gas enters the reaction chamber where an energy source (a flame, a hot filament or a plasma) breaks the bonds of both gases in the vicinity of a substrate held at 800° C or so. The process is complex, and involves free radicals, but essentially, carbon attaches atom-by atom to the substrate, while hydrogen manages dangling bonds and removes non-diamond material such as graphite. CVD diamond is available in a range of grades and purities, most having a polycrystalline microstructure.

Diamond results when the carbon atoms form sp3 bonds to give a tetrahedral bond network that has great rigidity, the reason for the hardness and high modulus of diamond. The structure also favours rapid propagation of vibrations, such that the speed of sound in diamond is around 35 times faster than in air. This gives diamond an unexpected property: it has the highest thermal conductivity of any material, typically being 4-5 times that of copper. CVD diamond finds uses as a heat spreader in electronics and X-ray anodes. The complex thermal properties CVD diamond are best exploited by understanding the effects of the polycrystalline structure. Torr Scientific Ltd. has published a study that models the use of a CVD diamond heat spreader in an X-ray anode, available here or here.

Diamond shows good transparency across a wide spectrum, from 226 nm (the bandgap value) up to 500 µm. CVD diamond has been used as a window for vacuum systems, X-ray sources and geochronology, even in aggressive chemical environments. Water cooling can be incorporated for enhanced heat dissipation. 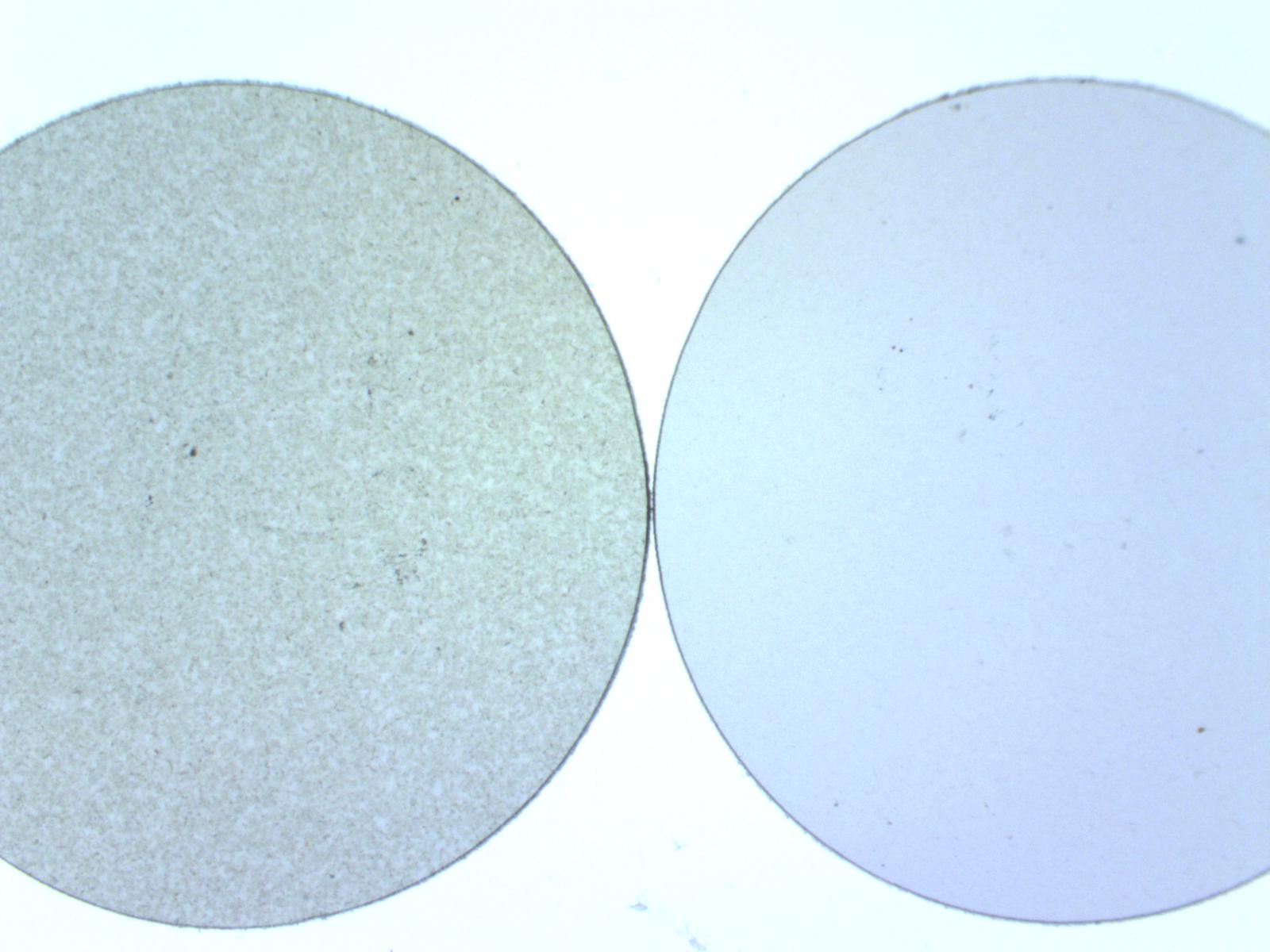 The results of a finite element analysis (FEA) showing the temperatures of an anode with (left) and without (right) a diamond heat spreader.

These images were acquired in a EPSRC/TSL jointly funded project in conjunction with University of Surrey.