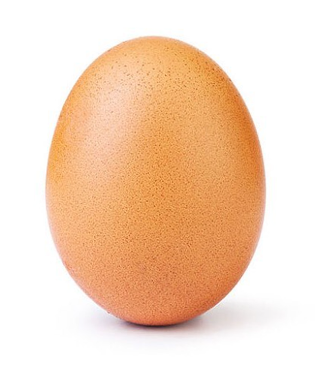 Aside from the rather gruesome events described by the New Testament, Easter is more commonly associated with happy concepts: the approach of spring, fluffy bunnies, pancakes and, of course, Easter eggs. For this article, we’re going to stay well away from crucifixions and resurrections and instead talk about eggs. We’ll discuss their role in nature, the properties they have that allow them to fulfil this role and some engineering considerations relevant to eggs and other brittle materials.

From the point of view of a bird (rather than that of a consumer of pancakes) the role of an egg is to protect the developing chick from pathogens and other onerous factors in the environment while providing nourishment and allowing gas exchange. For a chicken, the egg must be strong enough that it is not crushed by the weight of the brooding hen, but it must also be delicate enough that the chick can break its way out when ready.

The strength of an egg is not as easily apparent to as its brittleness. When we drop an egg, we are usually more worried about the mess it will make on breaking rather than any damage it might do by bouncing around. Likewise, it doesn’t require much force to break an egg on the side of a bowl. That said, if you take a chicken egg and squeeze it firmly in your hand along its long axis (that is, apply pressure to the pointy ends) it can take a surprising amount of force without breaking. Do remove any rings from your fingers before you attempt this.

The shape of the egg means that inward forces applied evenly at the ends are transmitted down the walls of the shell, causing the egg to bulge at its equator. In this sense, it is analogous to an architectural dome (except that the base of a dome is anchored to stop it moving outward). This outward bulging is resisted by the compressive stress (squeezing) on the inner surface of the shell and a tensile stress (pulling) at the outer surface. Within the region of tensile stress will be a fatal flaw at which failure will occur when the stress is great enough. The flaw might be a microcrack or surface scratch. Tensile stress is greater in the radial direction (round the egg’s waist, where the radius is tighter) than from top to bottom, so the fatal flaw will usually be oriented roughly perpendicular to this. The first crack will be vertically oriented and will be joined by more vertical cracks until the central part of the eggshell is comprised of several adjacent vertical strips. These strips will then break horizontally.

If the stress applied to an eggshell is localized, then failure is much more easily realized. This is what allows a chick to break out of the shell. It also allows you to break in and is the reason I suggested you remove your rings before squeezing an egg.

The failure mode described is typical of brittle materials such as ceramics. Ceramics fail almost invariably where tensile stress meets a flaw. The egg will fail in a region of tensile stress, even if the applied force is compressive. Tensile stress opens cracks; compressive stress tends to close them. Because there is some randomness to the number and location of material flaws, there is an inherent unreliability in the ability to predict the failure stress of ceramic materials. This unreliability is expressed for different materials by a number called the Weibull modulus: the higher the Weibull modulus the more predictable (or reliable) is the material. The Weibull modulus of an egg is within the range of technical ceramics, and eggshell has been describeda as “nature’s technical ceramic”. The field of Weibull statistics recognizes that the failure probability of a ceramic component can scale with its volume or surface area. This is simply because a larger component of the same material will have more flaws and a greater chance of a fatal flaw. Hence, the failure stress for eggs tends to decrease with increasing egg sizea.

In the design or analysis of ceramic components, Weibull statistics can help to quantify the relative failure probability of different component designs. In techniques such as finite element analysis, we instinctively compare the maximum stress. For ceramics, however, there is a chance that failure will occur in a region where stress is lower simple because there might be a catastrophic flaw there. In analysing ceramics for failure probability, we can integrate (sum) all the tensile stresses throughout the component so that low probability (low stress) failures are accounted for in any comparison.

I hope that all this talk of failure has not dented enjoyment of your Easter eggs. I hope you have a cracking holiday. Many associate Easter with its biblical traditions, but as is so often the case it has older influences than this. All the same, I will show some solidarity with those who like to give things up at this time of year. As a cursory and secular nod to a Christian tradition, I shall be giving up pancakes for another year. Happy Easter!