Customers with demanding optical requirements often specify a high degree of flatness for their viewport windows. In most applications, the ideal window would have no effect on the light passing through it. TSL has engaged a company with proven expertise in the field of optics to help assess the relationship between the physical flatness of our windows and the effect this has on the transmitted light.

The deviation of transmitted light from its ideal shape can be measured and quantified as transmitted wavefront error (TWE). TWE is commonly reported as a height map relating this deviation to the optical area. The maximum peak-valley distance is commonly reported in fringes or wavelengths (λ or lambda). The power (a non-distorting lensing component) is frequently removed from the measurement, leaving the irregular TWE, containing those components of TWE that are more difficult to correct for than power. 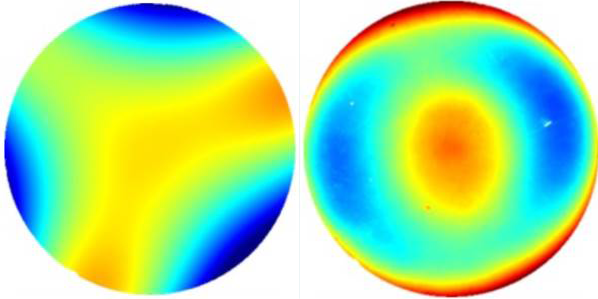 It might be that despite some inevitable distortion to the optic from the manufacturing process, there remains reasonable parallelism between the entry and exit faces, so that any deviation introduced at the air-optic interface is reversed at the optic-air interface, as illustrated in this highly stylized graphic, representing pairs of wavefronts with attached ray paths passing through a non-flat optic:

To see if TWE is many times smaller than the physical flatness in our other viewports, we will continue to acquire TWE and flatness data from across our viewport range and share the results and conclusions once a sufficient number of representative measurements have been made.